URUMQI－With his eyelashes covered by white frost in the cold, Tangerjak shouted with joy after he drove the puck from the circle and hit it into the opponent's goal. 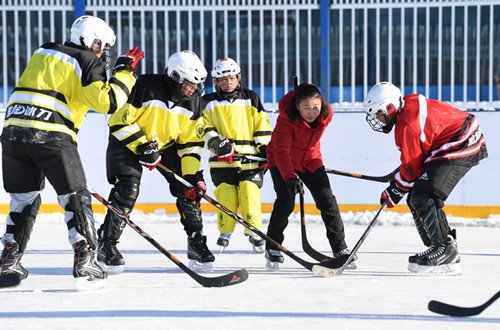 This is a common winter scene for Tangerjak, a 15-year-old student who lives in Fuyun, a county known for its extreme cold in the Xinjiang Uygur autonomous region.

Tangerjak was introduced to hockey in 2014 and has practiced regularly ever since. He is part of the only hockey team in Fuyun, which temperatures can plunge as low as -51.5 C in winter.

"I just love this game. It's so cool and so much fun," Tangerjak said.

Back in 2013, the residents in Fuyun, which has a total population of 24,000, barely even knew about hockey.

But everything changed when Zhou Xiaofeng, a physical education teacher at a local school and a former speed skater, decided to form a local team.

Introducing an unfamiliar sport was by no means an easy job. Knowing little about it, Zhou had to watch videos online to teach herself the rules and skills, then promote the sport among local primary and middle school students.

Tangerjak's passion was ignited the moment he heard about Zhou's initiative, and he instantly decided to become a hockey player.

He was not the only one who was inspired.

At the very beginning, there was no ice rink, and the team didn't have any hockey sticks. The players had to practice on a speed skating track until the end of 2013, when a project outfitted the team with equipment, including protective gear, hockey sticks, and skates.

Wearing brand-new gear, Tangerjak and his teammates would intentionally fall during practice to see whether the protective equipment really worked.

In addition, thanks to the project, Zhou was able to improve herself through a professional training program held in Qiqihar, Heilongjiang province, some 4,000 kilometers from Fuyun.

"It was not easy for me," she said. "But all the efforts paid off when I saw the smiles on the children's faces."

As the Olympic and Paralympic Winter Games Beijing 2022 approach, winter sports are gaining greater popularity with the upgrading of facilities in Altay prefecture, where Fuyun county is located.

The support from all sides has injected new momentum into the hockey team. Over the past seven years, three professional coaches have volunteered training, and a proper outdoor rink was built in 2018.

Tangerjak dreams of playing for his country one day.

"I want to watch the hockey matches when the Winter Olympic Games open next year in Beijing," he said. "Hopefully, I can become a world-class player."