Beijing will light the Olympic flame for a second time with a blazing ribbon after organizers unveiled an ethereal yet dynamic torch design to mark the one-year countdown to the 2022 Olympic Winter Games here on Thursday evening.

The torch, named as "Flying," debuted at a ceremony in Beijing's iconic 2008 Summer Games venue, the National Aquatics Center, marking the start of the 365-day countdown to the opening of the Games on February 4 next year. 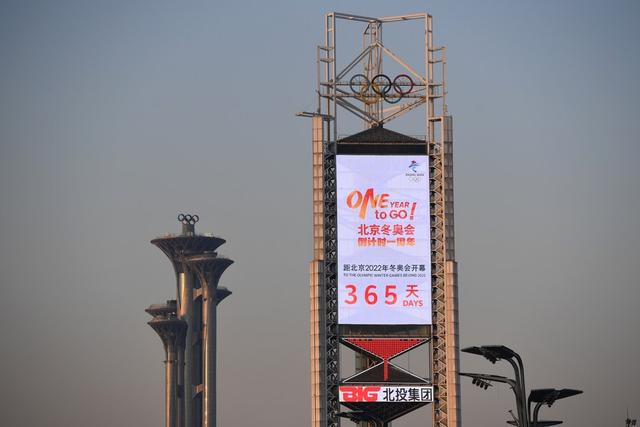 The photo taken on Feb. 4, 2021 shows a countdown display at the Beijing Olympic Park in Beijing, capital of China. (Xinhua/Ju Huanzong)

"To introduce the torch at the start of the one-year countdown, we expect to kindle the enthusiasm and anticipation for the 2022 Olympic and Paralympic Winter Games all around the world," said Wang Xiangyu, a deputy director of the Culture and Ceremonies Department of the Beijing 2022 organizing committee.

"The successful design of the torch has proved again that the Olympics always sets the stage for the integration of sports, culture, art and science," Wang said. 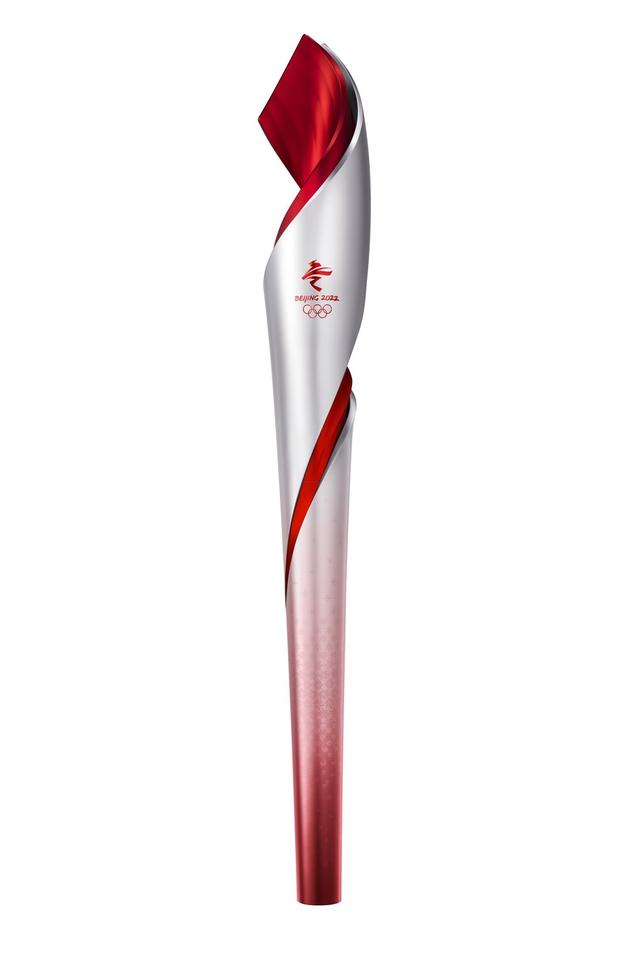 The handout picture released on Feb. 4, 2021 shows the design of the Beijing 2022 Winter Olympic Torch. (Beijing 2022 Organizing Committee/Handout via Xinhua)

COMBINATION OF CHINESE CULTURE AND OLYMPIASM

The 2022 Olympic torch spirals upward to resemble two overlapping fluttering ribbons. The inner red ribbon evokes rising flames, with the outer one plated in silver to produce a striking contrast.

Beaming with dynamism and vitality, the two-tone torch presents a metaphor of ice and fire, symbolizing how it will bring light and warmth to the winter sports gala.

The torch features the Beijing 2022 emblem and the Olympic rings etched on its section, with patterns of clouds and snowflakes painted from the bottom up to the flame.

As the torch turns, the whirling red line hidden in the crack seems to stretch endlessly, representing mankind's relentless pursuit of brightness, peace, excellence and the values promoted by the Olympic Movement, said the Beijing 2022 organizers.

To honor Beijing's status as the world's first city to host both the Summer and Winter Olympics, the 2022 torch features a similar design to the 2008 Games' main cauldron, which resembled a giant scroll, highlighting the legacy of the Olympic spirit in the Chinese capital. 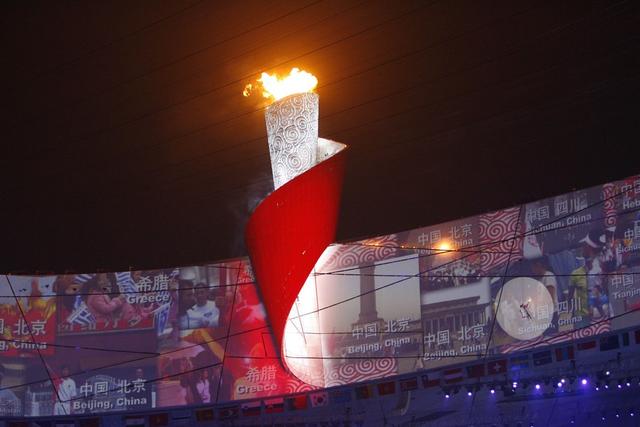 The cloud patterns covering the handle also drew inspiration from the main visual element of the 2008 torch, according to the design team.

"By using the same color combination and by sharing similar artistic elements with the 2008 torch, we aim to extend auspicious greetings to the world as we did at the Summer Games and to showcase Beijing's rich Olympic culture," said Li Jianye, the designer for the torch's appearance. 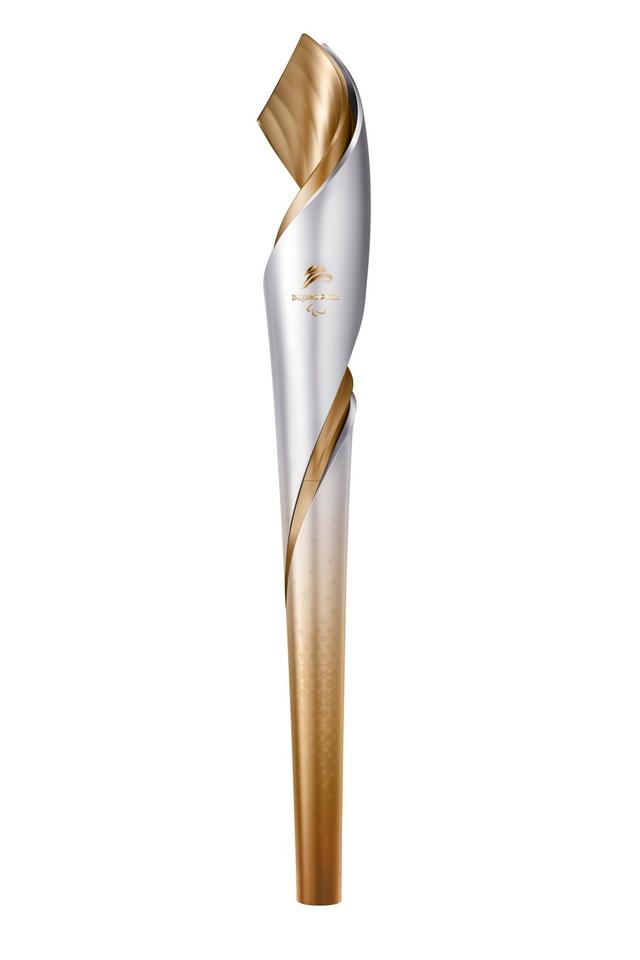 The handout picture released on Feb. 4, 2021 shows the design of the Beijing 2022 Winter Paralympic Torch. (Beijing 2022 Organizing Committee/Handout via Xinhua)

Another design highlight allows both torches to lock into each other at the top when one bearer passes the flame to another during the Torch Relay, symbolizing Beijing 2022's vision to promote mutual understanding and respect between different cultures.

The final design was selected from 182 entries into a global competition launched in April 2020 and was approved by the International Olympic Committee's Executive Board on December 7.

The unveiling of the torch was yet another indicator of China's smooth preparations for the 2022 Games, despite the challenges brought about by the COVID-19 pandemic.

With stringent anti-virus measures in place, Beijing 2022 organizers resumed venue construction as early as last February, which laid a solid foundation for the completion of all competition venues as scheduled. 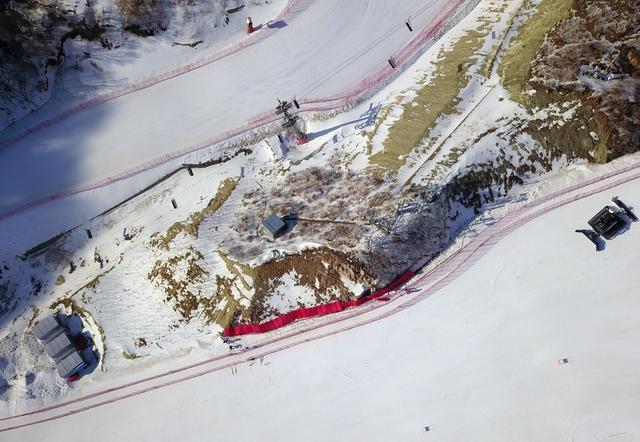 One of Beijing 2022's most technically challenging venues, the National Alpine Ski Center, was built over 1,200 meters above sea level on Xiaohaituo Mountain in the Yanqing competition zone.

At the foot of the Alpine Ski Center, a sliding track for bobsled, luge, and skeleton at the 2022 Games winds down the mountain, ready for the world's best pilots to display their courage and skills in disciplines often dubbed "Formula 1 on ice."

The 1.9-kilometer-long sliding center, the first of its kind in China, features 16 angled curves to resemble the shape of a mythical Chinese dragon. 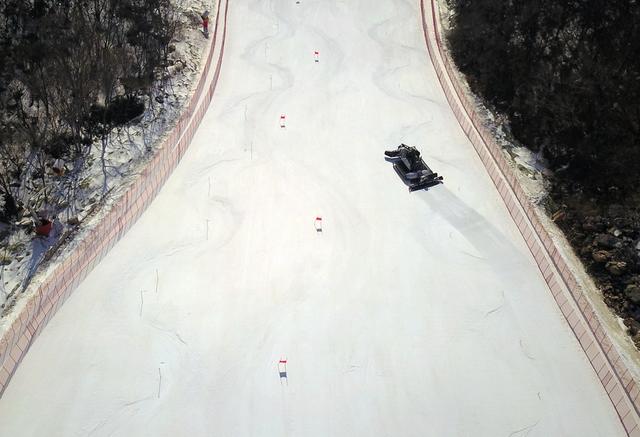 In October, the track was officially cleared for use at the Olympics and World Cup meets after passing a validation test, known as "pre-homologation," conducted by the International Bobsled and Skeleton Federation (IBSF) and a selected group of elite racers.

"We saw an excellently prepared track and were impressed by the smooth and perfectly organized event which was held under strict hygiene measurements due to the COVID-19 pandemic," IBSF president Ivo Ferriani said in a statement at the time.

Beyond the completion of the Games venues, Beijing 2022 is also experiencing tremendous success in the public domain.

A total of 38 corporate sponsors have been enlisted for Beijing 2022, including 11 official partners, 11 official sponsors, nine official exclusive suppliers, and seven official suppliers.

Also, in the field of volunteer recruitment for the Games, Beijing 2022 has seen massive interest, with around one million volunteer applications from over 160 countries and regions having been received.

"Despite the challenges of the pandemic, the preparations for the Games have progressed so smoothly," Bach said.

The first Games to fully incorporate the Olympic Agenda 2020 throughout the bid and lead-up to the Games, Beijing 2022 organizers have made great efforts to meet the targets.

One of Beijing 2022's great initiatives is the urban regeneration of the Shougang district, formerly an industrial complex that was relocated out of the city after Beijing 2008.

Cooling towers have been transformed into Olympic venues, blast furnaces into training centers, and an iron ore storage tower has even become home to the Organizing Committee.

Beijing will also re-use seven venues from the 2008 Olympics for the 2022 Winter Games. Among these, the "Water Cube" will host the curling events, and the National Indoor Stadium will host ice hockey events. The Opening and Closing Ceremonies will once again take place at the Bird's Nest.

It is just one of the 119 specific measures, under 12 actions, specified in the Sustainability Plan for Beijing 2022.

In another move in the quest for sustainability, all Beijing 2022 venues will be powered by green electricity. And four of 2022 Games venues will use a new ice-making technology that has nearly zero carbon emission and is expected to save more than 40 percent in energy consumption compared to an ice rink without this system.

"Beijing 2022 can set a new benchmark for a sustainable Olympic Games, on the one hand benefiting from the legacy of the Beijing 2008 and on the other developing a new winter sports destination in a sustainable way," said Bach.

As the world is still mired in the COVID-19 pandemic, Chinese President Xi Jinping called on coordinated efforts to contain the virus and prepare for the 2022 Games during his latest inspection tours of Beijing and co-host city Zhangjiakou.

It is important to ensure that the Games is hosted in a simple, safe, and wonderful manner, Xi noted.

That message struck a chord with Bach, who said that "the three slogans or words he (President Xi) expressed at the time reflect 100% the position of the IOC." 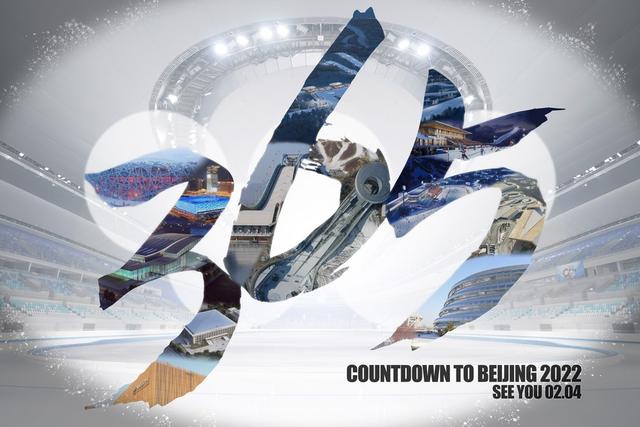 Although the test events planned for the first quarter in 2021 were canceled, Beijing 2022 has been given a resounding vote of confidence.

Tore Ovrebo, the director of Elite Sport of the Norwegian Olympic and Paralympic Committee, said that the pandemic has made their Games preparations difficult, but "one thing we know for sure is that the organizing committee will present us with fantastic facilities and venues."

That stance was echoed by World Anti-Doping Agency (WADA) President Witold Banka. "We all remember the successful and exciting summer Games of 2008 in Beijing and I have no doubt that the city will be able to match those high standards again next year," said Banka.

Athletes from overseas also long for competing in Beijing's venues one year out.

"I had such a wonderful experience in Beijing, wonderful memories of the competitions," said France's ice dancer Guillaume Cizeron, who partnered Gabriella Papadakis to their ISU Cup of China GP triumph in 2017.

"I'm very happy to go back for the Olympics. I think it's going to be very special."

The 2022 Olympic Winter Games will take place in February next year, coinciding with the Chinese Lunar New Year, or the Spring Festival, the most important holiday in China.