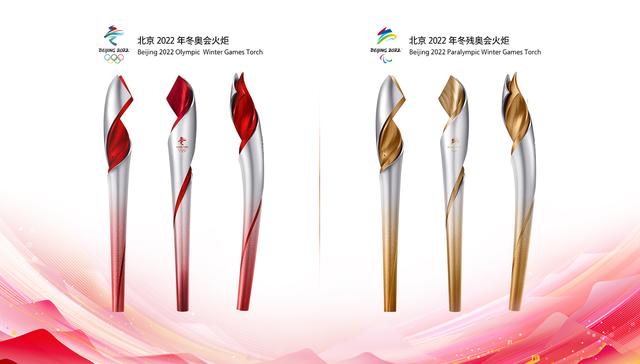 Beijing will light the Olympic flame for a second time with ‘a blazing ribbon’after organizers unveiled an ethereal yet dynamic torch design for the Olympic Winter Games Beijing 2022 to kick off the one-year countdown.

The Olympic torch, both named as "Flying", debuted at a ceremony in Beijing’s iconic 2008 Summer Games venue the National Aquatics Center on Thursday where the curling competition will take place in 2022, marking the start of the 365-day countdown to the opening of the Games on Feb 4 next year.

The torch spirals upward to resemble two overlapping fluttering ribbons. The inner red ribbon evokes rising flames, with the outer one plated in silver to produce a striking contrast.

Beaming with dynamism and vitality, the two-tone torch presents a metaphor of ice and fire, symbolizing how it will bring light and warmth to the winter sports celebration.

The torch features the emblem of the Olympic Winter Games Beijing 2022 on its mid-section, with patterns of clouds and snowflakes painted from the bottom up to the flame.

As the torch turns, the whirling red line hidden in the gap seems to stretch endlessly, representing mankind’s relentless pursuit of light, peace, excellence and the values promoted by the Olympic Movement.

“To introduce the torch at the start of the one-year countdown, we wish to kindle the enthusiasm and anticipation for the Beijing 2022 Olympic and Paralympic Winter Games all around the world,” said Wang Xiangyu, a deputy director of the Culture and Ceremonies Department of the Beijing 2022 organizing committee.

“The successful design of the torch has proved again that the Olympics always set the stage for the integration of sports, culture, art and science.”

To honor Beijing’s status as the world’s first city to host both the Summer and Winter Olympics, the 2022 torch features a similar design to the 2008 Games’ main cauldron, which resembled a giant scroll, highlighting the Olympic spirit’s legacy in the Chinese capital.

The cloud patterns covering the handle of the torch also draws inspiration from the main visual element of the 2008 torch, according to the design team.

“By using the same color combination and by sharing similar artistic elements with the 2008 torch, we aim to extend auspicious greetings to the world as we did at the Summer Games and to showcase Beijing’s rich Olympic culture,” said Li Jianye, the designer of the torch's appearance.

Another design highlight allows both torches to lock into each other at the top when torchbearers exchange the flame during the Torch Relay, symbolizing Beijing 2022’s vision to promote mutual understanding and respect between different cultures.

The final design was selected from 182 entries into a global competition launched in April 2020.The combination of Chinese aesthetic value, traditional cultural connotations and advanced technology helped the winning design team stand out, according to the judge.

“The current design strikes a perfect balance between the expression of the host nation’s culture, Olympism and the demonstration of the latest industrial technology,” said Lu Xiaobo, a member on the judging panel and dean of the Academy of Arts and Design at Tsinghua University.

Using a combustion system developed by the China Aerospace Science and Technology Corporation, the torch fueled by hydrogen most of the time (propane at certain circumstances), was designed and has undergone rigorous testing to burn reliably in most weather conditions and to withstand strong winds and extreme low temperatures.

Made of carbon-fiber materials, the torch is light in weight and resistant to high temperatures.

Planning for the Torch Relay and selection of torchbearers for the Games are underway with detailed information to be released in due course, according to the Beijing 2022 organizing committee.