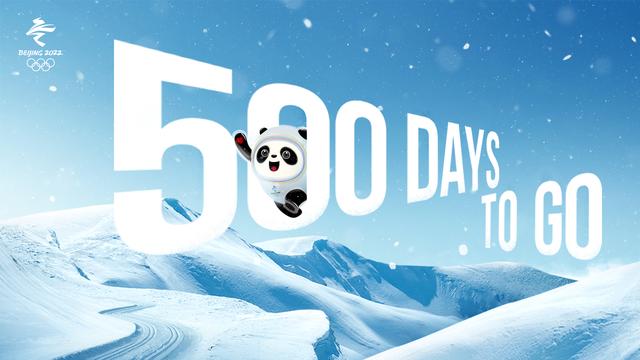 International Olympic Committee (IOC) President Thomas Bach spoke on this latest milestone and praised the progress that had been made so far saying “...the stage is set for successful Olympic Winter Games Beijing 2022 and for writing Olympic history."

Prior to the 500 days countdown, various other activities were held in the leadup to the celebrations. On 5 September, Air China revealed their “Winter Olympic Ice and Snow” themed aircraft at Beijing Capital International Airport as it took off to complete its maiden flight to Chengdu. On 11 September, Beijing 2022 held a launch ceremony to celebrate the release of Chinese education materials on the Olympics and Paralympics. Finally, on 20 September, a cultural event celebrating the 500 days countdown was held at the Badaling section of the iconic Great Wall of China to push the milestone into high gear.

As the 500 Days To Go campaign was launched, Beijing 2022 simultaneously announced the start of their global recruitment campaign for young filmmakers for the official Beijing 2022 film; began the solicitation for designs of posters for Beijing 2022; and launched the Beijing 2022 lecture tour series.

Several interviews were organised to commemorate the 500 days countdown milestone. CCTV recorded an interview with IOC President Thomas Bach via video link ; and the People’s Daily, CGTN, ChinaNet and other media outlets took part in group interviews to gain a better understanding of Beijing 2022’s commitment to host a ‘green’ Olympics and success in sustainability so far.

Beijing 2022 Vice President (Full Time) Han Zirong was interviewed exclusively with Xinhua News Agency to outline the latest developments in Beijing 2022 Games preparations, reassuring audiences that preparations were going smoothly and that construction of venues and infrastructure would be completed within the year as promised. Preparations for competitions and test events are also being carried out, while sustainability and legacy work continues to be executed successfully.

At this stage, renovation of existing venues such as the National Indoor Stadium and Capital Indoor Stadium has accelerated while many of the new venues are near completion. For instance, the structural roofing and façade of the National Speed Skating Oval has been completed; the main structure of the National Sliding Centre have been done; and the National Alpine Ski Centre tracks have met all test race requirements. In terms of infrastructure, the Beijing-Zhangjiakou high-speed railway and Beijing-Chongli highway has been opened to traffic and other supporting facilities for water, electricity, communications and municipal administration are being constructed.

Beijing 2022 has also made strides in important artistic and design elements of the Games. The official colour system and core graphics were launched earlier this year, while designs for the medals, Olympic torch and uniforms were also solicited. A comprehensive revision of all the medal, torch and other elements is expected to be released in the first half of 2021.

Despite the challenges that the COVID-19 pandemic has presented, Beijing 2022 has been able to ensure that all tasks moving forward in a steady and orderly manner. Pandemic prevention and control measures have been strictly implemented, and innovative work methods and full use of the internet and technology have been utilised to ensure that everything run smoothly.

500 Days To Go not only signals the fast-approaching Games, but it also signals that Games preparations will soon be accelerating into a sprint. In this next stage, though challenges are still expected, Beijing 2022 is confident that they will be able to deliver a fantastic, extraordinary and excellent Beijing 2022 Games and enrich the city’s Olympic legacy.