The Olympic and Paralympic Winter Games Beijing 2022 (Beijing 2022 Games) will be held in Beijing and Zhangjiakou, China, in early 2022. By then, athletes, sports officials and journalists from many countries and regions around the world will gather to celebrate this global sporting event. 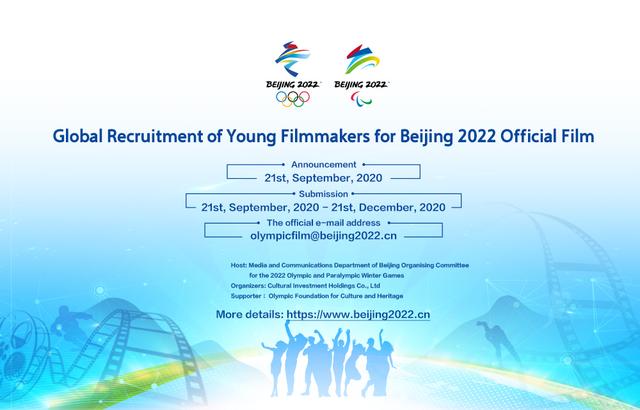 The recruitment is open to the young filmmakers with directing/Cinematography/editing experience who love the Olympic Games, admire the Olympic spirit and are enthusiastic about sport documentary and willing to support and contribute to the Olympic and Paralympic Winter Games Beijing 2022.

Please email the Application Form, the Letter of Commitment and the link to the original short film and the description about the creation to olympicfilm@beijing2022.cn by the deadline of submission.

Please indicate the recruitment section in the body of the email and it is suggested to attach the whole script (in English or Chinese) as the supporting material.

The Applicant shall be the chief director/photographer/editor of the submitted short film (the time length should be less than 30 minutes) which has not been released on any public platform, and there is no language restriction on the film.

Entries in languages other than Chinese is suggested to be embedded (submitted) with English subtitles.

The entry can be a short drama, documentary with positive theme,preferably be on sports .

There will also be 15 Honourable Mention Award winners to be awarded with Beijing 2022 Games tickets, licensed products and certificates of honour.

The First, Second, Third-prize winners will have the opportunity of joining the crew of the Beijing 2022 Official Film to assist the chief director in filmmaking around the world or at the Beijing 2022 venues.

This event is hosted by Media and Communications Department of Beijing 2022, organised by Cultural Investment Holdings Co., Ltd. and supported by Olympic Foundation for Culture and Heritage.

Media and Communications Department of Beijing 2022 reserves the right over final interpretation of the Activity.

1. The Programme for Global Recruitment of Young Filmmakers for Beijing 2022 Official Film (1) An Overview