“Voice of Beijing 2022” campaign is part of the overall response to the international community’s curiosity about preparations of Beijing 2022 with vivid stories and public information regarding recent achievements and progress made by far through CMG’s multiple platforms including its social media accounts at home and abroad, overseas radio stations, multilingual websites and mobile apps. 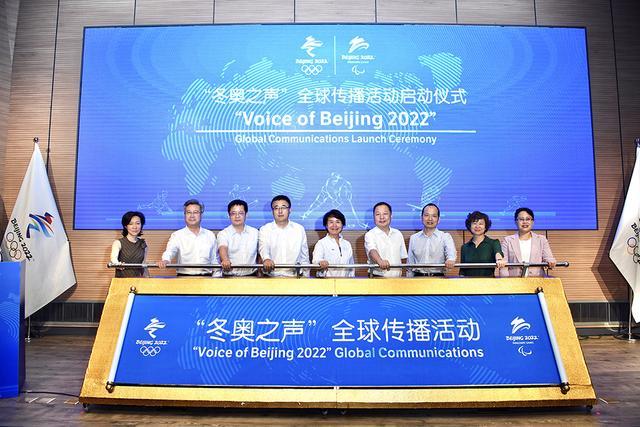 “Beijing 2022 is regarded as one of China’s significant landmark events. The CPC Central Committee attaches great importance to its preparation. General Secretary of the CPC Central Committee Xi Jinping has issued many instructions that act as the fundamental guidelines to improve our works. Under the leadership of the CPC Central Committee, we have taken effective action to realize our mission of being inclusive, open, green and clean. Over the past five years, we have worked closely with interested parties and pushed forward the preparations for the Winter Games Beijing 2022 in an orderly manner.” said Ms. Han Zirong, Vice President (Full Time) and Secretary General of Beijing 2022, in her speech at the launch ceremony.

She revealed that the construction of venues and infrastructure have already yielded great results as construction of all competition venues will be completed by the end of this year, and also the Beijing-Zhangjiakou high-speed railway and Beijing-Chongli expressway are now fully open for traffic.

On the other hand, the organizing works have been pushed ahead with as the official emblems and mascots were unveiled, over 850,000 volunteer applications have been received and 32 enterprises have become Beijing 2022 sponsors. Meanwhile, notable progresses have been made also in sustainability and other sectors.

“Since the covid-19 outbreak, Beijing 2022 is implementing strict prevention and control measures against the epidemic, while pressing ahead with the preparations in an orderly manner.” said Han.

“Beijing 2022 is a world-class sports event. It provides important opportunities not only for the communication of civilizations around the world, but also for China to present itself. As one of the key central news websites in China, CRI Online has been actively conveying Beijing's voice and demonstrating China’s vision to the whole world from Beijing’s bid for the 29th Summer Olympic Games to the preparations for the Beijing 2022.” Mr. Fan Jianping, Director of CRI Online, CMG said at the launch ceremony.

Beijing 2022’s preparations has entered the stage of readiness owing to the unremitting efforts made by all working staff. Relying on overseas news offices around the globe, multilingual Internet influencer studios, multi-language websites and other communication platforms, as well as 14 overseas FM radio stations located in 12 countries, CRI Online will continue to cover Beijing 2022’s progress in preparations to the whole world.

“We’ll build bridges between China and foreign countries in the sport sector and cultural platforms to promote vigorously the Olympic ideals, allowing audiences from all over the world to better understand China in this new era through the vivid stories of Beijing 2022.” said Fan.

The launch ceremony was presided over by Mr. Zhao Weidong, Executive Vice Director General of Department of Communications of Beijing Municipal Committee and Director of Communications Department of Beijing Organising Committee for the 2022 Olympic and Paralympic Winter Games. A promotional video was played onsite, which described Beijing 2022’s preparations so far to the audience. A short video titled “The World is Looking Forward to Beijing 2022” also showed the expectations and wishes from people all over the globe for Beijing 2022.

Following the launch ceremony, hosts from CMG’s English, Japanese, Hebrew, Lao, Tamil and Arabic services, and journalists from CRI Online took a media tour through the headquarters of the Beijing 2022in the Shougang Park and the snowboard big air venue. By the end of this year, multilingual hosts will also visit the National Aquatics Center, the National Speed Skating Oval, Yanqing Competition Zone and Zhangjiakou Competition Zone with a focus on the sustainability of the Beijing 2022. Through live webcasts on overseas social media, vlogs, reports and various multilingual and various formats, a series of reports will be presented to the international community,sharing the knowledge and expectations of Beijing 2022.