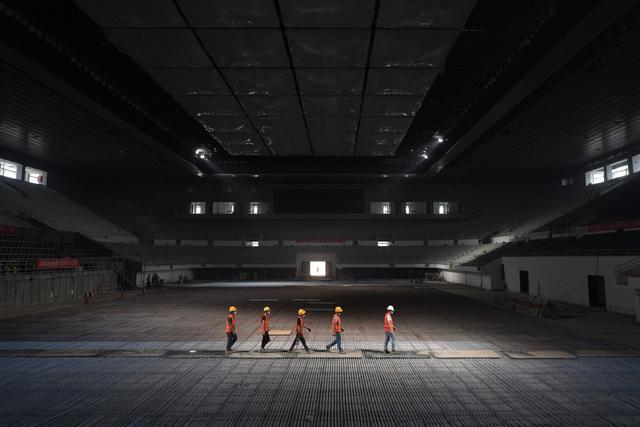 Featuring clean energy and new refrigeration technology, Beijing is gearing up to host the greenest ever Winter Olympics in 2022 as organisers push for the completion of all ice venues this year.

With a recent resurgence in COVID-19 infections in the capital now under control, preparations for the Games are back in full swing, with Beijing's construction regulatory body confirming on Wednesday that all the new competition venues for ice-based sports will be completed by the end of the year.

According to the Beijing Major Projects Construction Headquarters Office, the city is now pushing ahead with the construction of four new venues and the renovation of six existing facilities. In total, they feature 15 ice rinks which will host both competitions and training sessions for speed skating, figure skating, curling and ice hockey.

Interior decoration and the installation of refrigeration systems is underway at all projects, paving the way for the creation of competition-standard ice surfaces by the end of the year-should test events proceed on schedule amid the coronavirus pandemic.

"With preparatory work progressing well on all fronts, we are confident that all 15 ice rinks in downtown Beijing will be finished on time to be handed over to the Beijing 2022 organising committee," Huang Hui, director of urban venue construction with the office, said at the construction site of the National Speed Skating Oval.

With all ice sports staged within the downtown area, Beijing will host the majority of the Games' snow events in its northwest Yanqing district and the mountainous Chongli district in co-host city Zhangjiakou, Hebei province.

In a Winter Olympics first, all the 2022 venues will be powered 100 percent by green energy thanks to the operation of a new power grid across the country's northern highlands, which generates electricity from renewable sources such as solar and wind energy.

Also for the first time in the Games' history, carbon dioxide will be used as a refrigerant to make and maintain ice surfaces at multiple venues to replace the use of some environmentally harmful substances such as Freon.

Known as the "Ice Ribbon" due to the 22 light strands surrounding its exterior, the oval is expected to provide the best ever conditions for the world's top long-track speed skaters, according to designers.

"We are confident of making the fastest ever ice circuit for speed skating because of the use of the new refrigeration system," said engineer Ma Jin.

"The CO2-based cooling system is capable of lowering the ground temperature instantly and maintaining the temperature at any point on the surface to make the lubrication as consistent as possible."

The venue, which has an Asia-leading ice area of 12,000 square meters, will be the world's first of its scale to use the CO2-based refrigeration technology to make ice, according to Gui Lin, a Beijing 2022 organizing committee official.

Plans are in place to turn the "Ice Ribbon" into a sports and entertainment center for the public beyond 2022 by separating the giant ice surface into multiple rinks.

"At least two rinks could be developed on the surface within the speed skating circuit for junior training in figure skating, ice hockey and some ice carnival activities after the Games," said Gui.

"It really helps diversify the operation of such a giant competition venue beyond 2022."

Refurbishment work on some existing venues, such as the Wukesong Arena and the Capital Gymnasium, is also almost back on schedule despite being affected by the coronavirus outbreak earlier this year.

Smooth infrastructure progress has prompted some international winter sports governing bodies to start rearranging test events for the 2022 Games after an alpine skiing test race in Yanqing was canceled in February due to the virus outbreak.

The International Skating Union reiterated last week that this year's figure skating Grand Prix series final in Beijing (Dec 10-13) and a leg of short-track speed skating's World Cup (Dec 18-20) will be held as scheduled at the Capital Gymnasium despite the ongoing pandemic.

The ISU statement was issued after the General Administration of Sport of China released a guideline requiring all sports events organizers in the country to refrain from hosting unnecessary international events this year.

The ISU said it had received clarification through the Chinese Olympic Committee regarding its scheduled 2020 events in China.