Yum China unveiled a composite logo to mark the sponsorship

Since the opening of its first restaurant in Beijing in 1987, Yum China has grown into China’s leading catering company. The company has the exclusive right to operate and sub-license the KFC, Pizza Hut and Taco Bell brands on the Chinese mainland, and owns the East Dawning, Little Sheep, Huang Ji Huang and other concepts. It currently operates over 9200 restaurants in more than 1,400 cities and towns across China. 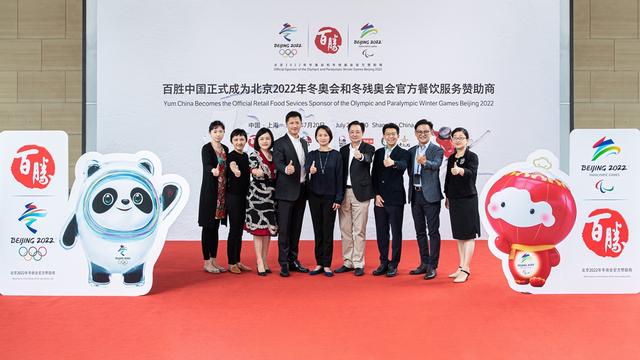 “We are honored to support the Olympic and Paralympic Winter Games Beijing 2022 as an Official Sponsor,” said Joey Wat, CEO of Yum China. “At Yum China, we are committed to leveraging our brand influence, strong offline and online network, as well as over 250 million members to promote the Olympic values of Excellence, Respect and Friendship. Building on our established connection with young people, we hope to inspire and motivate increased participation in winter sports, and contribute to the Olympic Movement.”

As the Official Retail Food Services Sponsor of Beijing 2022 Games, Yum China will provide retail food services for the Games. Yum China’s brands, including KFC, Pizza Hut and others, will provide related services at the Beijing 2022 Games venues for visitors and athletes from around the world. Yum China also plans to launch a series of Olympic-themed marketing campaigns to excite and inspire consumers.

Beijing 2022 will provide Yum China with a variety of marketing platforms and high-quality services, safeguard its sponsorship rights and interests, help the company benefit from the Olympic brand and achieve new development.