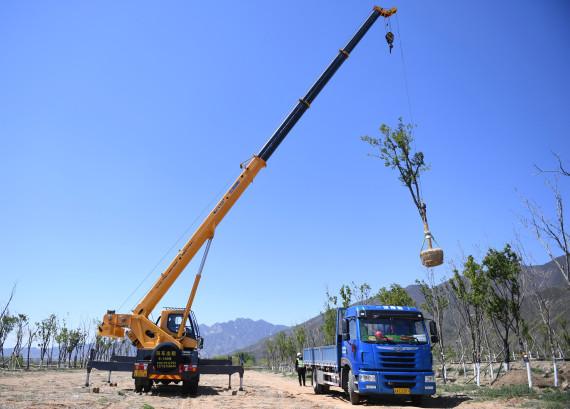 Garden workers are transplanting a tree at the Winter Olympic Forest Park in Yanqing district of Beijing on April 22, 2020. (Xinhua/Zhang Chenlin)

In Beijing's Yanqing district, one of three competition zones for the 2022 Olympic Winter Games, a series of environmental protective measures have been implemented in the construction of the new venues in that area. This includes the transplanting of millions of trees in the mountains.

BEIJING, April 22 (Xinhua) -- The Winter Olympic Forest Park in Yanqing district of Beijing has begun tree transplantation, which will be completed by the end of this month, local authorities said on Wednesday.

The park has a planned area of around 100 hectares, and started construction in April last year. The venue was planned to open at the end of this year, with nearly 60 percent of the construction of the project having been completed, according to Zhang Yixian, Deputy Secretary of Zhangshanying Township of Yanqing District.

According to the plan, the park will be integrated into the local landscape, displaying the culture of the Winter Olympics and providing a recreation area for residents and tourists.

The tree transplantation, as an important part of the construction of the botanical garden, will transplant trees and shrubs from the pseudo-planting area, including several varieties such as syringa reticulata, juglans mandshurica and fraxinus rhynchophylla.

To ensure the survival of transplanted trees, the constructor increased the root excavation area, wrapped the trunk and trimmed the crown according to species and volume of trees to minimize the damage of them. After transplantation, root powder and nutrient solution were applied.

Since 2017, the Yanqing district government has established a database for more than 6,000 transplanted trees. Visitors can get the information about each transplanted tree, such as its age and subject, by scanning the QR Code.

Located in northern Beijing, more than 70 percent of Yanqing district is mountainous. It will host Alpine skiing, bobsleigh and luge competitions during the 2022 Games.