“See You in Beijing in 2022”: Beijing’s Handover Performance at PyeongChang 2018 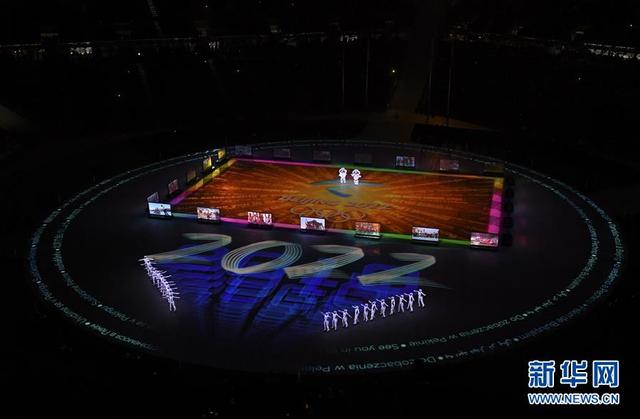 Beijing’s 8-minute Artistic Performance, titled "2022 See You in Beijing", is directed by famous Chinese film director Zhang Yimou. He has a lasting bond with the Olympics, for Zhang successfully directed Beijing’s 8-minute show at the closing ceremony of the Athens 2004 Olympics, as well as the opening ceremony of the Beijing 2008 Olympics. In a recent interview, the director told the media that this time, the performance will “use modern methods and thinking to display a rich mixture of Chinese cultural elements with winter sports, and project an image of China in a new era".

As the music starts, the performance officially begins. A total of 24 roller skaters and 24 “ice screens” attached on the automatic guided vehicles (AGVs), symbolic of the XXIV Olympic Winter Games to be held in Beijing, appear on the stage. The 24 performers, who all hail from Beijing Sport University, are made up of 22 roller skaters and 2 performers who each play a panda captain. With the assistance of high technology that projects an array of images onto the floor, the skaters glide and leave behind beautiful curving trails. Their movements, in perfect harmony with the AGVs, present an audio and visual celebration that combines technology and culture together into one. The idea of the panda captain is inspired by the “Giant Puppet of Sichuan province”, which is home to the pandas. The panda costumes worn by the captains are made by Nanchong Giant Puppet Theatre; it is the only troupe that produces and performs Northern Sichuan style giant puppet shows, a form of art on China’s intangible cultural heritage list.

The interactive movements of the roller skaters and the “ice screens” on AGVs result in images of winter sports such as ice hockey and curling that appear on the stage. The 24 performers wave their hockey sticks and shoot the virtual “pucks” into the “crystal displays”, causing a splatter of ice fragments. They go on to slide the curling stones towards the targets, and the moment the stones collide with the screens, dazzling luminescent rings come forth on the stage.

The lights become dim, and soon the stage becomes a frozen lake, where underneath the surface, shoals of fish are darting in the crystal clear water, lending vibrant vigor to the winter days. The roller skaters begin skating, and soon images of polar bears, deer, flying birds, and shoals of fish are presented on the “ice screens”, which, together with the gliding performers, present a scene of harmony between man and nature. Afterwards, the gliding trajectories interweave to form a massive Chinese knot on the floor. The Olympic and Paralympic Winter Games Beijing 2022 will be held during the celebration of the Chinese New Year. It is a Chinese tradition during the Spring Festival to make the knots, which symbolize unity, love and good fortune.

Skaters continue to move along beautiful curves, while images of China in the new era are shown on the “ice screens”. What comes first is the Great Wall, which, as a World Heritage Site, has been a longstanding symbol of China. Following is the high-speed rail of China. After nearly a decade of rapid development, the high-speed rail has become a major daily means of transportation for the Chinese people. By the end of 2017, the high-speed rail’s operating mileage reached 25,000 kilometers in length. At the same time, China's high-speed rail technology is being adopted by an increasing number of countries in Asia, Europe, the Americas, and Africa.

The National Centre for the Performing Arts also appears on the “ice screens”. It is China’s most prestigious venue for performing arts and it is also a platform for cultural exchanges between China and the rest of world.

The images of Chinese bridges come into sight. By the end of 2017, the number of highway bridges in China exceeded 800,000, and its high-speed railway bridges had a combined length of more than 10,000 kilometers. With those under construction counted in, there are currently 135 bridges traversing the main stream of the Yangtze River, downstream from Yibin in Sichuan. Meanwhile, there has been increasing Chinese involvement in the construction of bridges worldwide, including the San Francisco–Oakland Bay Bridge in the United States, the Penang Second Bridge in Malaysia, and East Africa’s longest cable-stayed bridge, the Kigamboni Bridge in Tanzania. China’s involvement in building bridges has given quite a name for its construction industry.

The bridges are followed by expressways. By 2017, the total mileage of expressways in China reached 130,000 kilometers in length, the longest in the world.

The “Heavenly Eye” also makes its appearance, which is a 500-meter Aperture Spherical Radio Telescope (FAST). Inaugurated in Guizhou in 2016, it receives electromagnetic waves from the depths of the universe. This enormous project will be of great importance for China in order to achieve major breakthroughs in the frontiers of science and to step up innovation-driven development.

Following the “Heavenly Eye” are images of China’s first independently manufactured large passenger jet, C919, which successfully completed its first test flight on May 5th, 2017. This aircraft has two versions, a standard version with a flight range of 4,075 kilometers, and an extended-range version with a flight range of 5,555 kilometers. China now joins the rank of the few nations that can develop their own large passenger airliners.

Finally shown on the screens are images of a future Chinese space station. In 2017, China's cargo spacecraft, Tianzhou 1, succeeded in its flight mission, setting the stage for "a space station era" in regards to China's manned space program. China will launch, in succession, a space station core module, a laboratory module as well as multiple manned spacecraft and cargo spacecraft, to ultimately build China's space laboratory. Up until now, China has more than 2,000 pieces of proprietary space technology applied to benefit the economy and people’s livelihoods.

While Chinese stories are being told on the screens, the gliding trajectories of the performers, viewed from the air, gradually change from colorful curves into a vibrant Chinese Long , also known as a dragon. The Chinese people are called the "Descendants of the Long", and the Long in China is different than the understanding of a dragon in the western world. The Chinese Long is a noble mythical creature that stands for auspiciousness, strength and wisdom. Afterwards, the gliding trajectories will evolve into a Chinese phoenix that is spreading its wings. The Long and Phoenix are, in Chinese culture, symbols of good fortune, representing the Chinese people's good wishes and blessings for the Winter Olympics.

The 24 AGVs move gradually to form a circle, and at the center of the stage appears the blue planet we live on. Shown on the “ice screens” are smiling children from around the world, and the stage is encircled by colorful ribbons, olive branches and plum blossoms. In traditional Chinese culture, the plum blossom is metaphorically used to symbolize noble character, perseverance and modesty. Next, the Olympic rings show up on center stage. The imagery of a global village, children’s smiling faces, the olive branches, plum blossoms and Olympic rings work together to embody a vision that China cherishes, that is, to build a community of shared future for mankind, promoting world peace, and together making the world a better place to live in.

The gliding trajectories of the performers now change to form the emblem of the Olympic Winter Games Beijing 2022, which is entitled "Winter Dream". The emblem, together with symbols of the 15 sport disciplines to be competed in at Beijing 2022, points to the continuous efforts that China has made to realize the Winter Olympics dream and become a great sports nation. China hopes to inspire millions of people to participate in winter sports, and will continue its commitment to promoting the worldwide development of winter sports and the international Olympic movement.

At this time, an internet tunnel emerges on the stage, through which the panda messengers travel back to China to collect invitations from the Chinese people. China has the world's largest number of Internet users, well over 700 million or one-fifth of the world's total, and is rising as a major country in Internet-related fields. The four display screens in the venue begin to play a video of the panda messengers flying across China to collect invitations and greetings from local people during the winter season. Chinese President Xi Jinping appears in the video, extending his warm initiation to the world, together with hundreds of millions of Chinese people. Afterwards, the panda messengers return with the collected messages to the performance venue in PyeongChang through the Internet tunnel.

Finally, at the center of the stage appears huge envelope, which is opened to reveal pictures of President Xi and countless Chinese people, greeting and welcoming friends from around the world. Beneath the envelope the years in which the 23 previous editions of the Olympic Winter Games were held appear, starting from 1924, the year of the Inaugural Games, up to 2018. The roller skaters then glide up to present the year "2022". Afterwards, circling the stage will have words "See you in Beijing" in languages from different countries, as China sends out an invitation to the world to get together in Beijing in four years’ time.