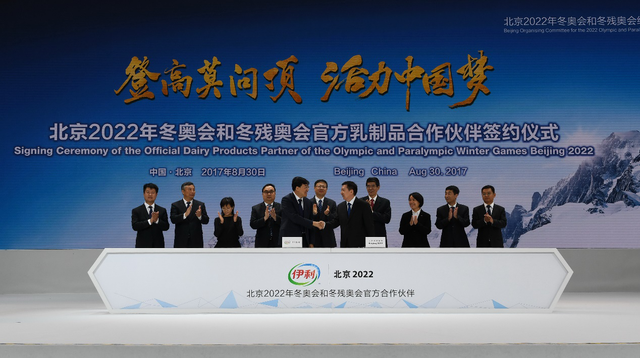 Inner Mongolia Yili Industrial Group Co., Ltd. (referred to below as “Yili”) has become the Official Partner of the Beijing Organising Committee for the 2022 Olympic and Paralympic Winter Games (“Beijing 2022”) on August 30, 2017.

Chen Jining, Acting Mayor of Beijing and Executive President of Beijing 2022, attended the signing ceremony at the National Aquatics Centre in Beijing.

Zhang Jiandong, Deputy Mayor of Beijing and Vice Executive President of Beijing 2022, and Pan Gang, Board Chairman and President of Yili, signed the partnership agreement.

“Yili has a history partnering the Olympic Games and Paralympics. ” said Pan.

“We will do our best to provide Beijing 2022 and all Olympic Family members with first-class dairy products,” he said. “We will commit to promote the development of Winter sports and advocate a healthy lifestyle for all,” he added.

Yili is not only the No.1 dairy group in Asia, but also the only Asian dairy group that has been listed in the Top 8 global dairy groups. Yili was the Official Dairy Products Sponsor for Beijing 2008.

“We congratulate Yili in becoming the Official Dairy Products Partner for Beijing 2022, following its partnership with Beijing 2008,” said Zhang.

“We believe Yili will provide quality products and services as an Official Partner of Beijing 2022”, he added.

Beijing 2022 launched its Marketing Programme in February this year. The Bank of China and Air China Limited have become the Official Commercial Banking Partner and the Official Passenger Air Transportation Services Partner respectively in the last two months.

The Official Sports Apparel Partner will be announced soon.