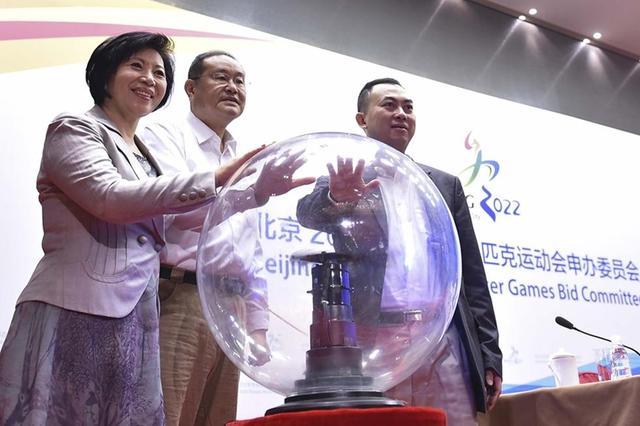 Officials from Bid Committee and Tencent initiated the official website

The joint bid of Beijing and Zhangjiakou for the 2022 Olympic Winter Games is another top international gala for which China is bidding after the Beijing 2008 Olympic Games and Expo 2010 Shanghai. It is closely connected to the Chinese dream of realising the grand renewal of the Chinese nation. The bid is conducive to further showcasing the image of China and enhancing the soft power and international influence of the country. Moreover, it will help spread the Olympic spirit, develop winter sports and speed up China’s advancement from a large sports nation to a strong sports power. The bid will also promote the joint development of Beijing, Tianjin and Hebei Province, and push forward the upgrading of industries such as fitness, leisure, culture and tourism. Furthermore, the bid is also a driving force for the improvement of urban environment, particularly air-pollution control, and the upgrading of people’s living quality and level of public health.

Since the launch of the bid for the 2022 Olympic Winter Games, the Bid Committee has followed the bid procedures as stipulated by the IOC and made a series of efforts, including building the official website.

The official website of Beijing 2022 Olympic Winter Games Bid Committee will focus on:

I. Serving as the main gateway for the Chinese public, international community and members of the IOC to know more about Beijing and Zhangjiakou.

II. Serving as the authoritative platform of information release by Beijing 2022 Olympic Winter Games Bid Committee. The Bid Committee will fully utilise the official website to release large amount of bid-related information in real time, and reflect the bid progress in an efficient, accurate and thorough manner. It will also provide a wealth of information on venues and facilities, tourism, environment and climate for the Chinese public, international community and members of the IOC.

IV. Serving as a channel of communication with more netizens and a pool of the wisdom of the public. The official website will launch events such as solicitations for slogan, songs, posters and photographs for the bid for the Olympic Winter Games, as well as related competitions. The netizens will be encouraged to actively participate in these events as well as to provide their valuable advices and proposals for the bid.